Sherlock Holmes and the Secret Weapon (1943) 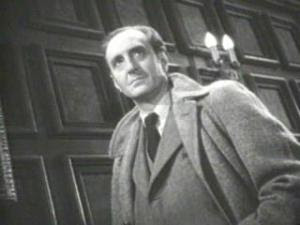 
Sherlock battles the Nazis in this propaganda war film made in 1942. Sherlock starts out the movie in disguise as an itinerant bookseller.

A Swiss inventor of a bomb sight for airplanes, which may change the course of the war, is rescued from the Nazis and then protected by Holmes and Watson.

Watson, for all his buffoonery, saves Holmes again by observing how heavy a trunk two men were carrying was. He also inadvertently provides the clue that cracks the secret code.

I love the patriotic endings to these movies. One can only imagine how the English audience felt in 1942.

Dr. Watson: "Things are looking up, Holmes. This little Island's still on the map."
Sherlock Holmes: "Yes. "This fortress - built by nature for herself; This blessed plot, this Earth, this realm, this England."