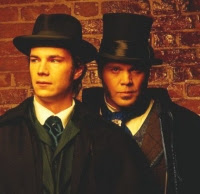 This movie tried to solve many of the mysteries behind the Sherlock Holmes persona. Why Sherlock took drugs, why Sherlock would never get involved with women, how he met Dr. Watson and even how he got his hat and pipe. It tried to answer all these questions but it didn’t explore the one thing that made him so interesting – his brilliance.

It showed a fighting Sherlock but he was presented as a second rate wit and that wasn’t too enjoyable to watch. The most exciting characteristic of Sherlock is his brilliance and it wasn’t on display here.

The movie does present a very competent and helpful Dr. Watson. In this regard it was more faithful to the Conan Doyle stories than the Rathbone movies, but it wasn’t as much fun. Sherlockians will admire the portrayal but I’ll take Nigel Bruce. The comic relief he gave those movies was a big part of their charm.

I also wasn’t thrilled with James D’Arcy as Sherlock. Although he played a young Sherlock, he still didn’t seem to capture the essence of the man. On the other hand, I thought Vincent D’Onofrio’s Moriarty was very well done.

I also didn’t think the movie did a good job of capturing Victorian England. Most of the outdoor shots looked like they were filmed on a stage.

Overall a decent movie, worth seeing, but nothing special.