The Adventures of Sherlock Holmes (1939) 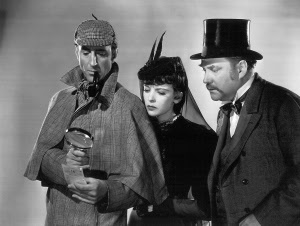 
This movie was based on the William Gillette play which began touring the US around 1899. Basil Rathbone and Nigel Bruce were great as Sherlock and Dr. Watson, George Zucco was also really good as Moriarty.br>
The story was very entertaining as Sherlock again matches wits with the Professor. The Professor, who lives to outwit his only true rival, again outwits Sherlock by taking advantage of one of his weaknesses. the Professor says, "Holmes, you only now barely missed sending me to the gallows. You're the only man in England clever enough to defeat me. I'm going to break you. I'm going to bring off right under your nose the most incredible crime of the century, and you'll never suspect it until it's too late. It'll be the end of you Sherlock Holmes."br>
Watson is again the perfect observer of Holmes' brilliance and is also a great element of comic relief, as he is in all of the movies in this series. At one point Holmes says of him : "Whatever Watson has found out, you'll know inevitably. I have unbounded confidence in his lack of discretion." The movie also stars Ida Lupino as a woman in need of help.br>
It's the little things that make these movies so charming and clever. Holmes trying to discover a musical note that will drive away flies, Holmes in disguise singing a song, Holmes taking a carriage on a wild ride. The Adventures of Sherlock Holmes is a movie that has held up really well.