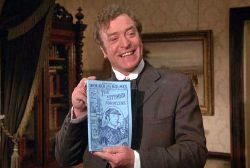 
Gentlemen I accept this case. My fee will be five hundred pounds -- payable in ten pound notes."


Dr. Watson is a brilliant criminologist but he was interested in getting into a prestigious medical society so he hires an actor, Reginald Kincaid, to play detective for him. Reginald, who takes on the role of Sherlock Holmes and gets famous as Watson writes the stories for Strand Magazine, is a drunkard, a gambler and a womanizer. The first half of the movie is really good as Holmes plays the role and Watson roles his eyes at him.
Michael Caine does his usual great job at playing the drunk and Ben Kingsley does a good job playing the frustrated Watson, who would like to get rid of his creation but cannot. There are a lot of good lines in the first half of the movie as Sherlock and Watson battle more than they partner.
Holmes: As a matter of fact, Lestrade, You can be some help.
Inspector Lestrade: Of course!
Holmes: Hold my coat, it's hot in here.


Holmes: Ah, gentlemen. And what can I do for you? A mystery to be solved?
Thug: You might say that. There's a little matter of a gambling debt, and the mystery is why you ain't paid it.

Watson: Holmes believes your father has been abducted.
Leslie: Abducted? By who?
Sherlock Holmes: Abductors

Unfortunately, the second half of the movie is nowhere is good as the first. Sherlock steps up to help Watson battle Moriarty but the story and the writing descends into mediocrity.
The first half of the movie which is a comedy works really well, the second half which is more of a mystery isn't as good. Still, overall a pretty good movie with two great actors. Needs to be seen by Sherlock Holmes fans.