Sherlock Holmes and the Voice of Terror (1942) 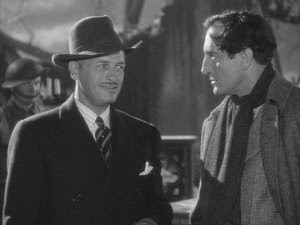 "Germany broadcasting. Germany broadcasting. People of Britain. Greetings from the Third Reich. This is the voice you have learned to fear. This is the Voice of Terror. Again we bring you disaster, crushing humiliating disaster. It is folly to stand against the mighty wrath of the Fuhrer. Do you need more testimony of his invincible might to bring you to your knees?"

He foretells of acts of doom and gloom. Acts of sabotage are predicted and called for by the Voice. The Ministry calls Sherlock Holmes for help with the Voice of Terror. Sherlock gets the members of the criminal class, stirred by patriotism, to help out (somewhat reminiscent of M). They actually save him from some German agents, along with Dr. Watson. There is a good scene of Sherlock playing the violin, and playing it quite well. Sherlock knows there is a leak in the Council, but who is it? The Voice gets on the radio again and says that Germany will strike England on their weakest coast, tomorrow morning. The council wants to move supplies to shore up where they think the attack will be. Holmes knows that it is a diversion.

Holmes : There's an east wind coming, Watson.
Dr. Watson : No, I don't think so. Looks like another warm day.
Holmes : Good ol' Watson. The one fixed point in the changing age. There's an east wind coming all the same. Sush a wind has never blew on England yet. It will be cold and bitter, Watson. And a good many of us may whither before its blast. But its God's own wind nonetheless and a greener, better, stronger, land that will lie in the sunshine when the storm is cleared.